USC’s participation in the Olympics dates back to 1904, when Emil Breitkreutz ’06 traveled to St. Louis, becoming the first USC student to compete in the Olympic Games. Breitkreutz took home a bronze medal in the 800-meter run — marking the beginning of a Trojan Olympic legacy that today is unrivaled.

Since then, USC has produced more Olympians, overall medalists and gold medalists than any other university in the United States.

USC’s star-studded Olympic roster includes 472 Trojans who attended the university before, during or after their Summer or Winter Olympic appearances. These athletes have represented 65 countries and participated in 30 different sports, ranging from those generally associated with USC, such as track and swimming, to more unusual sports, such as team handball, canoeing and bobsled. While Trojans traditionally have found their place in the sun during the Summer Olympics, USC athletes also have competed in the Winter Olympics 11 times.

All told, USC’s Olympians have won 711 places on Olympic teams, and have taken home 144 gold medals, 91 silver and 72 bronze.

But these achievements amount to more than medals and an abiding place in sports history. In the words of USC President Carol L. Folt, “Every one of these Olympic performances represents more than a moment in time for our Trojan athletes — each race, game and match is also a tribute to the years of sacrifice and dedication that made them Olympians, as well as the support and love they received from those around them. These Trojans show the world what it means to ‘Fight On!’” 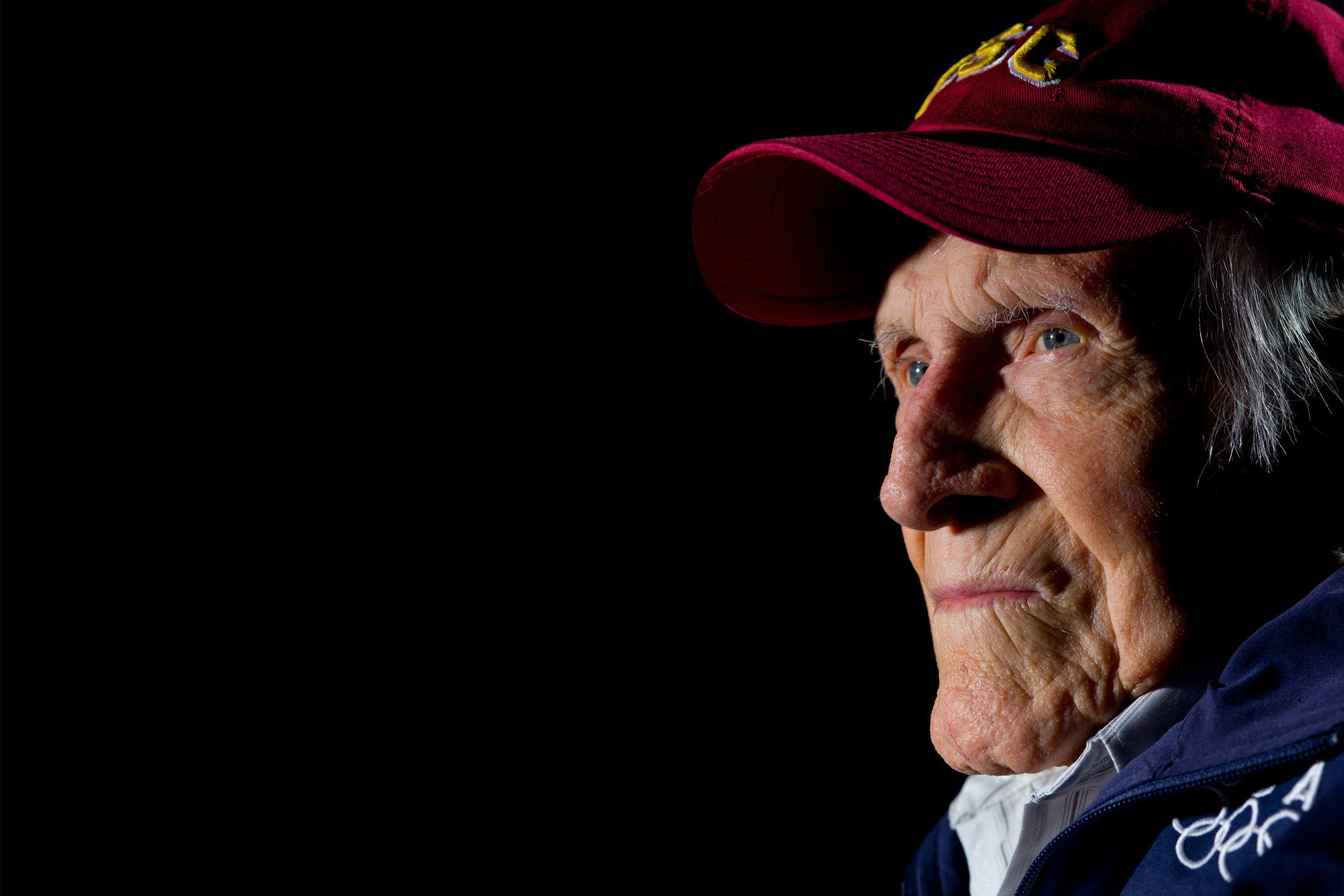 The late Louis Zamperini was lauded for his bravery and never-surrender spirit. (Photo/David Ahntholz and Tracy Boulian)

Perhaps the most widely recognized USC Olympian whose life demonstrated these ideals was the late Louis Zamperini ’40. Zamperini represented the United States in the 1936 Olympics in Berlin, running a phenomenal final lap at 56 seconds. His career took a dramatic turn when the U.S. entered World War II, and Zamperini joined the U.S. Army Air Corps as a bombardier. During a routine mission over the Pacific in 1943, Zamperini and his crewmates on a B-24 crashed into the Pacific Ocean. Surviving for 47 days on open waters, he was later captured and held under brutal conditions in a Japanese POW camp for two and a half years. Struggling to overcome the traumatic events during his captivity, Zamperini rebuilt his life upon his return to the U.S., and later became a renowned public speaker, frequently discussing the topics of motivation and reconciliation. His remarkable story is recounted in the bestselling book, Unbroken, which was later adapted into full-length feature film in 2014.

Going into the 2020 Olympic Games, if USC were a country entering its athletes in the Olympic Games, its 305 all-time Summer Olympics medals would place it 13th among all participating countries. And in 11 different Olympics, USC’s medal count would have positioned it among the top 10 12 competing nations.

Equally impressive is USC’s history of winning Olympic gold. Ever since USC’s first gold medalist, freshman Fred Kelly ’16, earned the gold in the 110-meter high hurdles in Stockholm in 1912, Trojan athletes have won at least one gold medal at every Summer Olympics. This includes the U.S.-boycotted 1980 Moscow games, when swimmer Michelle Ford ’84, competing for her native Australia, captured the gold in the 800-meter freestyle.

USC’s Olympic heritage includes seven Trojans who have been inducted into in the U.S. Olympic Hall of Fame — Janet Evans ’95 (swimming), Sammy Lee MD ’47 (diving), Lisa Leslie ’94 (basketball), John Naber ’77 (swimming), Parry O’Brien ’54 (track and field), Charles “Charley” Paddock ’23 (track and field) and Frank Wykoff ’33 (track and field) — as well as hundreds more who have brought gold and honor to their countries and their university.

Download the facts and complete roster of USC Olympians or visit the virtual gallery.