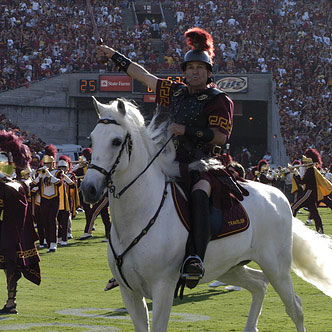 Traveler, the noble white horse that appears at all USC home football games with a Trojan warrior astride, is one of the most famous college mascots.

Traveler first made an appearance at USC football games in 1961 in the home opener versus Georgia Tech. Bob Jani, USC’s director of special events, and Eddie Tannenbaum, a junior at USC, had spotted Richard Saukko riding his white horse, Traveler I, in the 1961 Rose Parade. They persuaded Saukko to ride his white horse around the Coliseum during USC games, serving as a mascot. Ever since, whenever USC scores, the band plays “Conquest” and Traveler gallops around the Coliseum.

The Traveler tradition began in 1961 with Traveler I. From 1961 to 1988, USC’s equestrian mascots were selected, trained and ridden by Richard Saukko. After his death, the Saukko family continued the tradition of raising the famous Trojan horses until 2003, when equestrian manager Joanne Asman took over.

The Traveler statue located across from Tommy Trojan in Hahn Plaza on campus was a gift from Steven and Kathryn Sample and was unveiled on May 4, 2010. The statue is bronze with a white patina modeled after the pure white Andalusian horse that is our majestic mascot, Traveler.

USC’s mascot horse is a symbol of ancient Troy. Its rider, with costume and sword, is a symbol of a Trojan warrior. The name Traveler, spelled with one “l”, is a common name among horses. One example is the foundation sire for the entire American Quarter Horse breed who died in 1912 and was inducted into the quarter horse hall of fame in 1994. USC’s Traveler is and has always been a proud symbol of Troy. There is no truth to any other claims or rumors about its name.