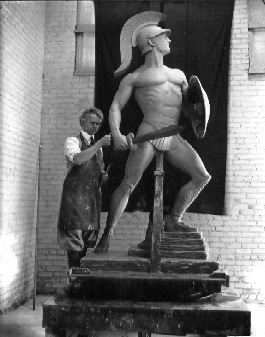 On the Drawn Sword of Tommy Trojan

By Norman Corwin
Presented in Bovard Auditorium on the occasion of the public announcement of the Campaign for USC, September 26, 1986

There is on this campus, not far from where you are sitting, a sculpture of a young man. He stands with an outthrust sword in his right hand and a raised shield in his left, and he obviously means business.

For more than half a century he has been the inseparable symbol of this university. But this morning, when we meet to consider ourselves, and what we do, and how well we do it, it is perhaps not idle to ask just what that Trojan symbolizes. He’s a warrior, but this is not a military academy. He has a noble mien; he is beautiful; he is confidently poised to attack or defend – but exactly who is the adversary, and from what quarter does he come? If we look for clues on the pedestal of the sculpture, we find two lines of poetry in the Latin of Virgil, which translate

Here are provided seats of meditative joy
Where shall arise again the destined reign of Troy.

The trouble is, seats of meditative joy don’t quite go with the stance of an armed and powerfully muscled fighter, so we have to look further; and we find another sentence in Latin, this one unattributed. It translates, “Let him bear the palm, who deserves it.” Nobody can quarrel with that, but it doesn’t help answer our question. Next are five adjectives in English, strung out with nothing to modify: “Faithful, scholarly, skillful, courageous, ambitious” Not much help there either.

Ah, but there are also two panels of bas-reliefs of human figures. The first depicts four athletes, representing basketball, running, wrestling, and discus- throwing. (Not football, strangely, but then how could a sculptor 56 years ago foresee … that incredible 1974 win over Notre Dame?)

All right – a remaining panel is crowded with seven figures, representing medicine, engineering and five other useful disciplines. Still, in all this, there is no identifiable enemy arrayed against Tommy Trojan – and remember, he is the logo, the signature, the blazoned emblem of this university. And symbols, I hardly need say, have importance; they can be sacred – a flag, a cross, a star, a crescent moon.

I think the answer to the question is that our militant young man, as well as his implied foe, stand for whatever we want to read into them. I’m sure I’m not alone in perceiving Tommy Trojan’s symbolic enemies to be not Greeks bearing gifts or Huns bearing arms, but the far more menacing, because far more subtle and invidious, enemies of ignorance, indifference, greed, mediocrity, prejudice, complacency, boredom, eroded values, low expectations, and ravenous hungering for sensation.

It seems to me that the whole process of civilization is what we read into things. What is philosophy, what is morality, what is law, what is religion, except what each reads into life and into the knowledge of life? What indeed is the character of a university, except what, collectively, it reads into the process of education itself, into the arts and sciences, into the professions, into commerce, into government, into the ponderous and fateful issues of war and peace?

Norman Corwin (1910-2011) was a familiar and honored teacher at USC from 1979 until the end of his life. Over the course of his decades-long career in writing for radio, television, stage, film and print, he garnered numerous writing awards, including a best-screenplay Academy Award nomination, an Emmy, the Peabody Medal and the Valentine Davies Award of the Writers Guild of America. He was the first writer admitted to the Radio Hall of Fame. A documentary on his life, A Note of Triumph: The Golden Age of Norman Corwin, won an Academy Award.